Once the post has been sent, you’ll see the information regarding delivered emails and email addresses that don’t work; a list of contacts who opened the email or clicked on any of the links within the email (as well as the amount of clicks and time of clicks); most popular links; email programs used (including mobile view); contacts who marked the email as spam; contacts who unsubscribed etc.

*The actual success of the email shows the amount of contacts who received the email, found information that interests them and moved on to your webpage. This is the most valuable indicator.

The “Unsubscribed” field shows the amount of contacts who chose to opt out from receiving newsletters in the future.

Created at – date and time of creating the post.

Due at -a date for which the post is scheduled. If “Sent right away” is displayed under start date, the sending of the post has started five minutes after starting the post. If a date is displayed, this is the date of when the post was sent out. In that case the post could have been started on the 4th of December, for example, but the sending has been scheduled for the 6th.

Completed at – date and time of when the sending has stopped, i.e. when all the emails had been sent.

Sender’s address  – email address from which the post is sent out.

Reply to address – email address to which the recipient can respond to after receiving the email.

List(s)  – Contact lists to whom the post has been sent to. When excluding lists those lists will also be displayed under General information.

Under “Audience” you’ll see the countries in which your post has been opened. In addition, the information regarding the email service providers, operation systems and mobile platforms used by your contacts is displayed. 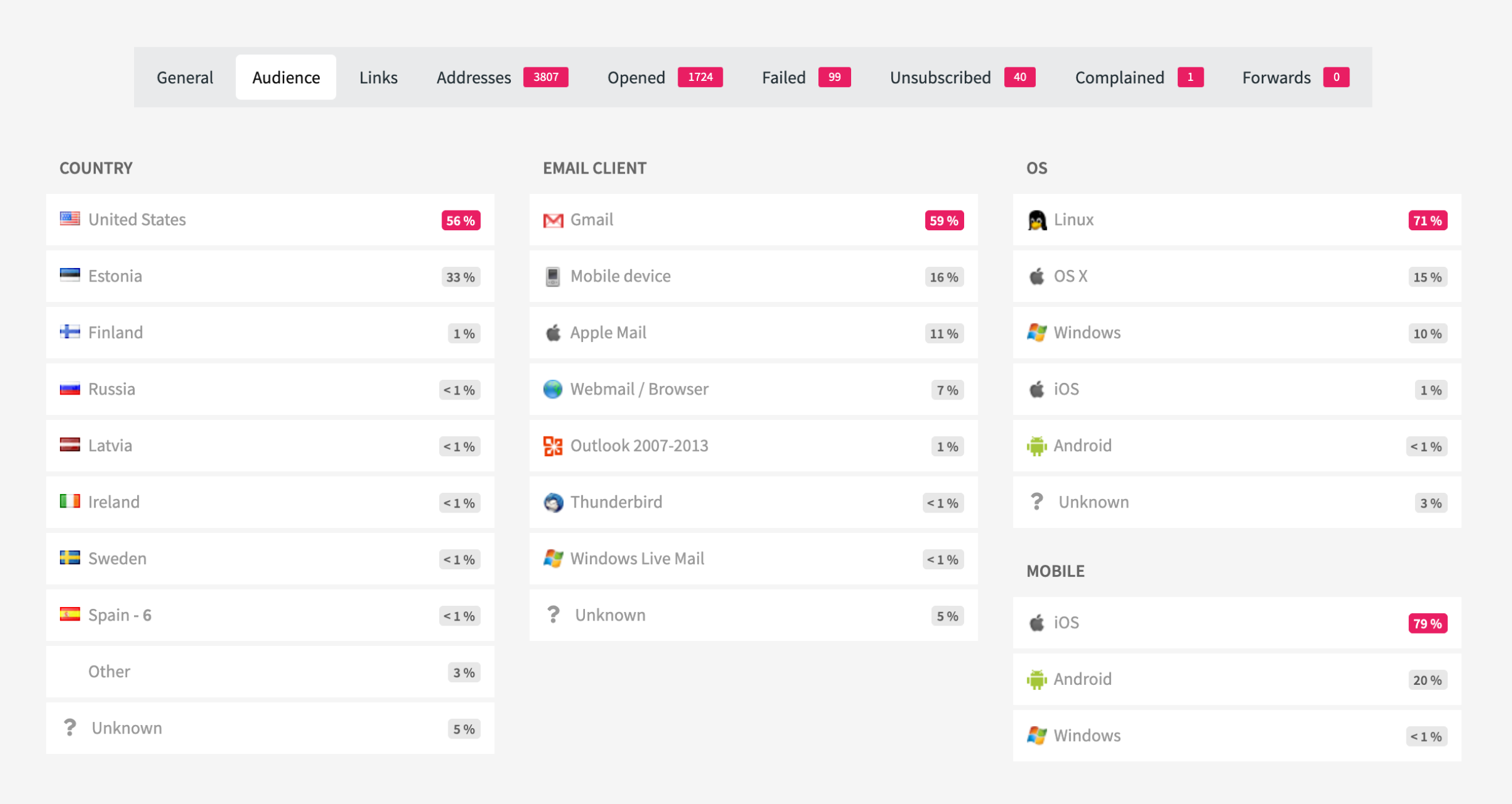 Under “Links” you’ll find information regarding clicks on the links in your email. Email addresses who clicked on a particular link will be shown when you click on the specific link.

Here you’ll see the statistics regarding contacts who have received the newsletter and opened it. In addition you can find information regarding clicks on links or images within the newsletter as well as time spent on the clicks. “Viewed” shows how many times the newsletter has been opened and on which dates.

Under unsubscribed you’ll find contacts who have chosen to opt out from receiving future newsletters. In addition to the number and percentage which are shown as general statistics, you’ll also find the email address of each unsubscribed contact and the time of unsubscribing.

Under complaints contacts who have marked your post as spam after receiving it, are displayed.

The recipient of your newsletter has the possibility to forward your email. Under forwards you’ll see contacts who have done so. In order to forward the email, you must add that possibility to your email template (more in “Forward to a friend” tutorial)